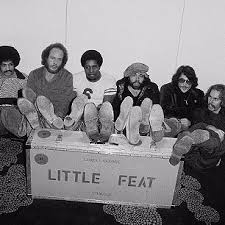 I’ve been a Little Feat fan since there first record came out in 1971. There are 4 eras of Little Feat. # 1. Is the Lowell George era, and my favorite era of the band. This was 1971 to 1979. During this time they made 9 LP’s! My favorites were “The Last Record Album”, “Time Loves A Hero” and there Live Double LP “Waiting for Columbus”! What I loved about Little Feat were the songs Lowell George wrote! His Slide Guitar playing and his vocals were such a joy to listen too! Plus Richie Hayward is still one of favorite drummers, the guy was amazing! Lowell George died in 1979 and the band broke up.
The second era, 1987 to 1993. In 1987 Little Feat got back together with Craig Fuller and Fred Tackett, taking the place of George. This lineup’s first LP “Let It Roll” was my favorite!

Check out the rest on my Little Feat Page.