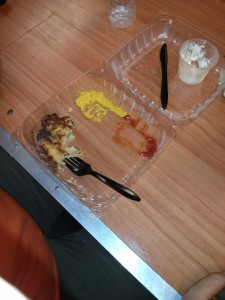 My co-worker Scott is a really nice guy, but he has this one very strange thing that he does! He puts Mustard on a lot of the foods that he eats! When he first got hired, I witnessed him eating Saltines with Mustard on them. I thought this was kind of weird, but I forgot about it as soon as lunch was over. Then one day I saw him dipping his pretzels in Mustard, and again that seemed kind of weird! Then I saw him putting Mustard on his popcorn, and I asked him, do you put mustard on everything you eat? “I love mustard” he told me, “and I put it on a lot of the food I eat.” When he eats a lot of mustard he gets this really bad gas! Sometimes I walk down an isle where he is working and I have to turn around and run, the smell is so bad that your eyes water! So when I see him eating food with mustard on it, I try to avoid him for the rest of the day. You know he’s released his Mustard Gas, when you see co-workers running in all directions!

You should see Scott when his mustard bottle becomes empty, this grouchy look comes over his face, and he goes on a search for some Ketchup or Miracle Whip. I have seen Scott put mustard on Tuna Fish, mustard on Pickles, (That almost made me throw up) mustard on Cheese, mustard on Top Ramen, mustard on French Fries, mustard on Eggs, mustard on Mash Potato’s, mustard on Burritos, mustard on Toast, and Mustard on Scones. I thought I had seen everything he could possibly put mustard on. Then last week the Store Manager bought our team breakfast. French toast from a place called “Kneaders”. We all sat down, spread the butter on the two huge slices of French toast, and poured that great tasting maple syrup on. As I was about to take another savory bite, I saw Scott go to the refrigerator and pull the mustard out. He poured the mustard on his plate and dipped his toast in it. Right about that time the Store Manager looked at Scott’s plate, and said “you got to be kidding me…You set that great tasting syrup off to the side and use Mustard instead!” “What can I say?” Scott replied “I like Mustard!”