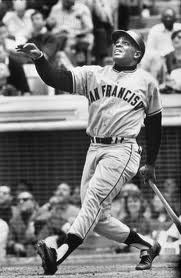 When I was young I spent a lot of time over at my good buddy Bob Leary’s house. Bob’s dad, Gordon was a huge San Francisco Giants fan. He told me all about each player on the team, but there was one player he talked about more than the others, and his name was Willie Mays! In 1969 my good friend Mike Brunker invited me to stay with his family in San Rafael for two weeks. On Aug 17 Mike’s mom dropped us off at Candlestick Park so we could see the Giants play! I was so excited, I get to see the Great Willie Mays play! We were in the second deck behind home plate on this sunny day with 25,586 people in attendance. I remember there was this old black guy sitting behind us. He had this rubber chicken, and he would stand up and yell “Chicken” when the Cubs were batting. Mike and I both got the biggest kick out of that guy! Mays made an out his first at bat, but in the 4th he hit a 2 run Home Run over the bleachers in centerfield. The whole place went crazy including the chicken man!

In the 6th, Mays got an RBI single and then somehow made it to second base. While on second, the third baseman went to talk to the pitcher and they didn’t call time out. Mays being the heads up player he was took off and stole 3rd, everyone in the crowd stood up and gave him a huge applause. The Giants won this game 5 to 3, and the Great Willie Mays finished the game with two hits, one run scored and 3 RBI’s. This was my first Major League Baseball Game. Not only did I get to see Willie Mays hit a Homer and steal a base, I was overwhelmed by the size of the crowd, and enjoyed how much fun people can have at watching this game of baseball. I remember Mike’s mom picking us up and how much she enjoyed listening to us talk about the game. Whenever people ask me who my favorite baseball player is. I always say “Willie Mays” then I get these strange looks from everyone because I’m a big A’s fan.  But my favorite sports memory is seeing the “The Say Hey Kid” play, and watching that crazy chicken man!